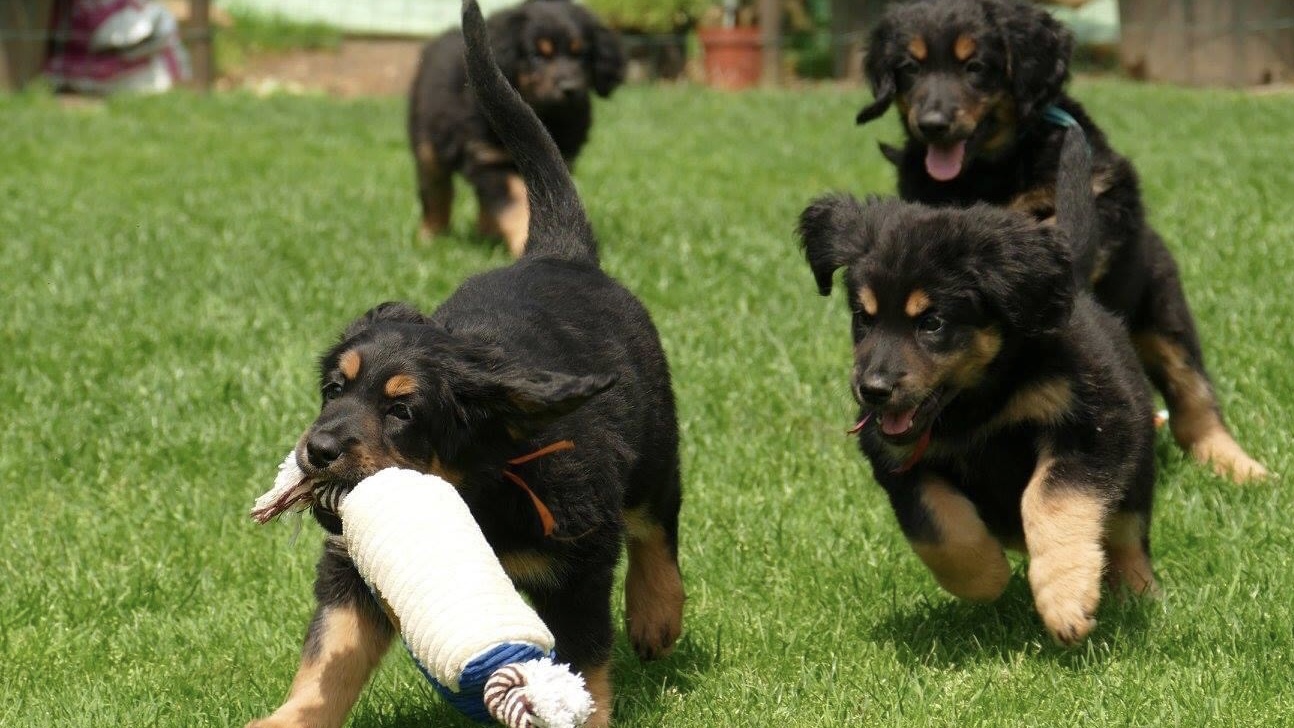 History of the breed

Following the medieval period, the popularity of the Hovawart began to decline. Newer breeds such as the German Shepherd Dog slowly replaced the Hovawart as a guard and working dog until it had almost disappeared by the beginning of the twentieth century


The beginnings of hovawart breeding

Around 1915 a group of enthusiasts decided to try to save the breed. Predominant in this group was the zoologist Kurt Friedrich König. They started by looking for dogs in the farms of the Black Forest region. König then started a careful breeding program using these dogs and crossed them with Kuvaszok, Newfoundlands, German Shepherd Dogs, Leonbergers, a Bernese Mountain Dog and an African hunting dog. After much work the group was rewarded in 1922 when the first Hovawart litter was entered into the German Breeding Registry. The enthusiasts continued their work and in 1937 the German Kennel Club officially recognised the Hovawart. All this work was almost undone with the outbreak of the Second World War. Because of their abilities many Hovawarts were used in the German war effort and perished. By 1945 only a few remained. Enthusiasm for the breed remained and in 1947, Otto Schramm and some fellow enthusiasts in Coburg formed a new club, the Rassezuchtverein für Hovawart-Hunde Coburg which is still in existence today. In 1964 the German Kennel Club recognised the Hovawart as the country's seventh working breed.

The Hovawart does exceptionally well in search and rescue, tracking and working dog activities. The females are generally lighter in build. In training and especially obedience work the trainer must keep positive reinforcement in mind all the time, as this breed is not as eager to please as many other working dog breeds: it always needs some kind of motivation. It is important to realize that the Hovawart works with people and not for people. They do have the ability to think and act independently. Their guarding instinct for example does not require any real training; it is inherent, as it is what they were bred for. The Hovawart may easily become reluctant if training is built only on punishments.

Dogs which do not conform to the impression of original breed type
Distinctly “doggy” bitches, distinctly “bitchy” dogs

Important Proportions:
Distinctly differing body proportions than those quoted in the standard

Head:
Lacking stop
Blue eye or wall eye
Erect, tipped ears, rose ear; off-standing ears
Undershot, overshot or wry mouth
Absence of more than 2 of the 4 PM 1 or the 2 M3, or absence of any other tooth

Colours General:
All colours not conforming to the standard, e.g. blue-grey, deer colour, brown, white, patched, blond with smutty touch or predominantly banded hair
White patches. Single white hairs on the inside of the upper thighs are not a disqualifying fault

Black and tan dogs:
Grey or brown patches other than the correct markings
Undercoat predominantly of another colour than black
Predominantly grey or whitish markings

Black dogs:
Grey or brown patches
Undercoat predominantly of another colour than black

Blond dogs:
Some single white hairs on the nasal bridge are not a disqualifying fault
Red-blond colour throughout without getting lighter
Whitish-blond colour, also on ears
Distinctly white markings
Dark patches or dark mask